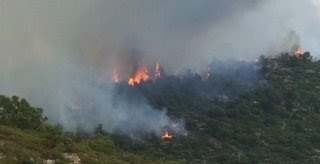 A hot summer in Abruzzo, the one we just had, and not just because of the weather. Actually, we were soooo lucky with the weather. OK, one week average 44 degrees hot, but we were staying with my brother at the seaside, and hot weather is just more bearable on a beach. If it gets too much, I can always decide to stay in the water till my neck, and this is exactly what I did. What the heck, that's what I am dreaming about the whole year in rainy Amsterdam, so it's not just a bit of hottiness to spoil my day.

Then we went home, in de middle of the place where woods were burning. And that makes a completely different story. I was following the fires everyday on the news and everyday there were new ones. A plane crashed while attempting to estinguish the fires, the pilot died, the region called for and received the calamity status (which means: extra money allotted to repair the damages). And then we went there ourselves. Me, my mom and the kids. After leaving L'Aquila, while driving toward Bussi, we could see far away a tower of smoke. Too far to understand where exactly it was, but undoubtedly from our village's side.

Then just before Navelli, we drove into thick smoke. We could smell it now, and I can tell you, fresh wood burning smells really nice, I always loved it. Just not this one time. My older child was also triggered by the smell. "Mom, do you smell it? They are roasting sausages and meat on the stick". Yes, it smelled of campfire, and of arrosticini, that's what he meant. And than I thought we were lucky it was'n a garbage belt burning. That one wouldn't been smelling nice.

So we stayed a week in the village, and every evening we would go out for a walk and see a thin red line of burning fires somewhere far away, on the edge of a mountain. On the way back home the line has moved.

The road near Navelli was closed to traffic the day after we passed. So all the traffic was diverted on a couple of godforgotten mountain roads (with fantastic views, that's true). After two days someone put handwritten signs on a cardboard to show were to go to each village. Beacause nobody, really, knows these roads. When it became clear it was no temporarly diversion, the signs became more solid. I don't know if by now they re-opend the main road. Might not happen that soon, Navelli and Collepietro were truly badly hit.

And for the whole week I felt under siege in my own village. You know, the place I am longing to go one whole year long. We have never been seriously in danger, that's not it, but it was a very nasty feeling seeing smoke towers during the day, and burning lines at night. And one evening, after the first, big summer storm of the season we saw after a thunder a new fire starting on the road to Villa Santa Lucia. Probably the only one with a natural cause of the whole season.
(picture stolen at http://rossitramonti.blogspot.com/2007/07/cadlo-afoso-ed-incendi.html) thank you, Emiliano
Pubblicato da Mammamsterdam a 9:58 PM No comments: 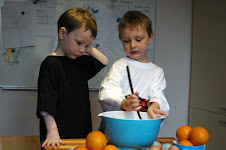